An IT Veteran Continues to Serve on Multiple Fronts 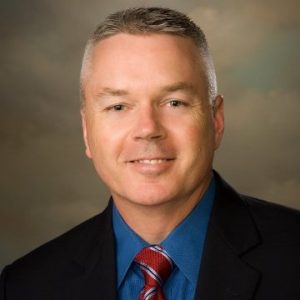 Three decades ago, working in information technology likely meant repairing fax machines or Xerox copiers. For a young Clint Perkinson, a future with a degree in electrical engineering did not seem like a fulfilling long-term career path based on the job outlook at the time. Instead, he joined the Navy and became an electronics technician working on radar and digital communications systems. He found his passion a few years later, when computers began appearing on ships.

The director of information technology at Beebe Healthcare got his feet wet with networks as they were being born and adapted on Naval vessels, and gained experience in infrastructure planning when he helped set up “war games” for multibranch training exercises while with the Naval Surface Warfare Center in Virginia. Experiencing the digital revolution over his 20-year military career gave Perkinson a unique perspective in information logistics when in 2006 he was brought on as a project manager for a new hospital being built in Richmond, Ind.

One lesson he learned from his time in the Navy was that communication was key to success. The nursing staff was faced with the challenge of a larger hospital with no increase in staff. He did not want to simply utilize more overhead communications to page nurses and doctors, which he says would detract from the healing atmosphere hospitals require. Instead he found an alternative and tailored it to fit his needs.

“We implemented a wireless network that supported voice-grade communications and went with a product that looked similar to the communication badges from ‘Star Trek,’ called Vocera,” Perkinson said. “A patient could hit the nurse call button and be connected directly to the caregiver assigned. A nurse could speak a colleague’s name into their device and be directly connected to that team member.”

In an effort to completely eliminate overhead paging, Perkinson and his team also integrated messages going to doctors and nurses into Vocera, allowing them to receive text notifications instead of being paged with complicated codes overhead.

After a few years in Indiana, when a position opened at Beebe Healthcare in Delaware, Perkinson jumped at the chance to be near the ocean again. He is working to bring a similar communications network to Beebe, in addition to innovative ways to deploy a cost-effective information technology architecture that ensures quality care is delivered to all patients. For Perkinson, working in healthcare is more than a job to pay the bills.

“In the military, I was inculcated with a sense of service to others and this is why I still feel at home in healthcare IT surrounded by colleagues who don’t just work for a paycheck but go home every night knowing they have had a positive impact on the lives of others,” Perkinson said.

Learning from colleagues and pushing them to be their best define Perkinson’s leadership style. He keeps an open-door policy and allows his team to bring challenges to him as well as offer solutions. He also encourages everyone to participate in overcoming obstacles, whether adding to an idea in a meeting or offering an alternative solution.

One thing that is never allowed is complacency, from his team or in his personal life. Joining an organization, getting certification and other kinds of professional or educational development are expectations, rather than suggestions. This aligns with Beebe’s core values as well, as they seek to better healthcare not only in Delaware but across America.

Always looking at a bigger picture, Perkinson speaks of a problem he wants solved in his lifetime. “I want to see interoperability between systems succeed so that my medical story is available to physicians whether I am in Delaware or Florida. Today, our industry is fragmented and health data is siloed. Healthcare has put considerable focus on this goal and has come a long way, but there is still work to do.”

He continues to work with his colleagues in an effort to achieve that goal amid the daily tasks and challenges at Beebe Healthcare.

Looking to contribute to the AEHITechnology Newsletter? Email your contributions to [email protected].